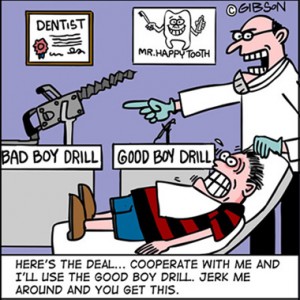 A reader asked how I could have waited four months before seeing a doctor for some groin pain. Big Red Story.

I remembered this joke when I went to an oral surgeon to have an upper molar removed. I had to tell a joke and should have known better.

Funny how when we enter the doctor’s surgery we’re asked : “How are you ?”. I guess we could fib. Reply : “Fine thanks”, and then turn tail and walk out again.”

I would be careful about such humor. My own to the dentist did  me no good. I further informed her that I would not need a shot as I could self-hypnotize myself. True. But in the doing I told her a joke about dentists. ALWAYS a bad idea. Dentists always prefer mouths that don’t talk back.

Was about a Wyoming cowboy. People think of Texas cowboys. They are wimps! Anyhow, this cowboy comes to the dentist and asks to have all of his teeth removed. ALL? asks the shocked and astounded dentist? Well, I suppose I will have to give you some painkiller.

He responds. Don’t need to. I have gone through two pains in my life. This will be nothing like them.
The dentist proceeds and yanks out all of his teeth. Not a grimace of pain….

Amazed, he asks him; what in the world where those two great pains? He replies. It was over a campfire lit night. I had moved from the campsite and went to relieve myself and in so doing a bear trap caught my testicles.

“OH MY GOD” That must have been your life’s biggest pain. No, he replied, that came – that came – when I jumped up.

My dentist did not appreciate that humor, and so it goes. Hole in the Gum photo. The gap between Cape Flattery and my upper jaw could not have been greater. 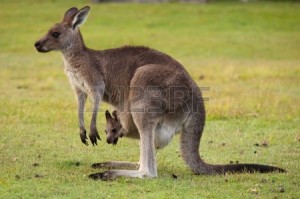 Mary Ann used to be a major traveler. Her husband was not. The last big one was to New Zealand and Australia. John was home, when Robbie (a Port Angeles friend and trickster) called in with the best Australian Accent. “Is this Mr. John Stephens, this is Quanta’s Airlines and we are holding a large box for pickup sent by your wife.”

My wife didn’t send anything. “Oh, sir, we must disagree, and you see it is becoming a bit of an issue. You see, it is a Kangaroo and well; the box is getting a bit rank. Would you please kindly hurry over to pick it up.” He then gave John the airport gate and all that.

John freaked and was heading out the door when others in the know intercepted him.

A local Sequim rock-yard has a very nice owner but like myself he too had a touch of wickedness to him.

We have a strange basalt that is interwoven with lines, colors and streaks. It looks virused. After telling him that his rocks looked diseased and I wanted a discount, he got worried …

Joe told that line to his young daughter. He was worried about their health and feared for the rock yard, as more rocks could get sick.  Next you knew it, the dear child was out there with soap and water, bathing the poor things. She would be in her late thirties now. I wonder how she would remember it?

I still feel a bit chagrined about this one. (Anjo soils -remains one of my favorite places in Sequim.)

MORE JOKES FROM THE INTERNET

Man races into the ER and yells, “My wife’s going to have her baby in the cab!” I grabbed my stuff, rushed out to the cab, lifted the lady’s dress, and began to take off her underwear. Suddenly I noticed that there were several cabs, and I was in the wrong one.
Dr. Mark MacDonald, San Antonio, TX

At the beginning of my shift I placed a stethoscope on an elderly and slightly deaf female patient’s anterior chest wall. “Big breaths,” I instructed. “Yes, they used to be,” remorsed the patient.
Dr. Richard Byrnes, Seattle, WA

One day I had to be the bearer of bad news when I told a wife that her husband had died of a massive myocardial infarct. Not more than five minutes later, I heard her reporting to the rest of the family that he had died of a “massive internal fart.”
Dr. Susan Steinberg, Manitoba, Canada

While acquainting myself with a new elderly patient, I asked, “How long have you been bedridden?” After a look of complete confusion she answered… “Why, not for about twenty years-when my husband was alive.”
Dr. Steven Swanson, Corvallis, OR

And Finally . . . . .
A new, young MD doing his residency in OB was quite embarrassed performing female pelvic exams. To cover his embarrassment he had unconsciously formed a habit of whistling softly. The middle-aged lady upon whom he was performing this exam suddenly burst out laughing and further embarrassed him. He looked up from his work and sheepishly said, “I’m sorry. Was I tickling you?” She replied, “No doctor, but the song you were whistling was ‘I wish I was an Oscar Meyer Wiener’.”

One doc operated on a person for a hernia…

One doc operated on a person for a hernia. He opened his testis and took the balls out and kept it on the table. At the end of the operation he wanted to put his balls back into the pouch of testis. He searched operation theater but could not find the balls of the patient. Lastly he told nurse to get two small onions from his lunch box as he cannot keep his testis pouch empty. After that operation he met the same patient in a garden for morning walk. Being a good doc, he asked his patient how he is feeling now. He said “Doc everything is fine, life is very cool except that whenever I scratch my balls, my eyes start watering.”

Two blonde girls were working for the city public works department. One would dig a hole and the other would follow behind her and fill the hole in. They worked up one side of the street, then down the other, then moved on to the next street, working furiously all day without rest, one girl digging a hole, the other girl filling it in again.

An onlooker was amazed at their hard work, but couldn’t understand what they were doing. So he asked the hole digger, ‘I’m impressed by the effort you two are putting into your work, but I don’t get it — why do you dig a hole, only to have your partner follow behind and fill it up again?’

The hole digger wiped her brow and sighed, ‘Well, I suppose it probably looks odd because we’re normally a three-person team. But today the girl who plants the trees called in sick.’

The doctor said, “You’re not really a redhead, are you?
“Well, no” she said, “I’m actually a blonde.”
“I thought so,” the doctor said. “Your finger is broken.