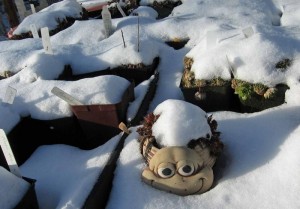 In celebration of Winter and good wishes to all Winter endowed climes I offer the following tale: The author is unknown and remains in hiding or is suffering from terminal S.A.D.

A SOUTHERNER MOVES NORTH — A tale a few years old!

JAN 12: It’s starting to snow. The first of the season and the first we’ve seen in years. The wife and I took our hot buttered rums and sat by the picture window watching the soft flakes drift down, clinging to the trees and covering the ground. It was beautiful.>

JAN 14: We awoke to a lovely blanket of crystal white snow covering the landscape. What a fantastic sight. Every tree and shrub was covered with a beautiful white mantle. I shoveled snow for the first time in years and loved it. I did both the driveway and our sidewalk. Later, a city snowplow came along and accidentally covered up our driveway with compacted snow from the street. The driver smiled and waved. I waved back and shoveled it again.

JAN 15: It snowed an additional five inches last night and the temperature h as dropped to around 11 degrees. Several limbs on the trees and shrubs snapped due to the weight of the snow. I shoveled our driveway again. Shortly afterwards the snowplow came by and did his trick again. Much of the snow is now brownish gray.

JAN 16: Warmed up enough during the day to create some slush which soon became ice when the temperature dropped again. Bought snow tires for both cars. Fell on my ass in the driveway. $145.00 to the chiropractor, but nothing was broken. More snow and ice is expected.

JAN 17: Still cold. Sold the wife’s car and bought a 4×4 in order to get her to work. Slid into the guardrail anyway and did considerable damage to the right rear quarter-panel. Had another eight inches of the white shit last night. Both vehicles covered in salt and crud. More shoveling in store for me today. That goddamn snowplow came by twice today.

JAN 18: Two degrees outside. More #%*&5@ snow. There’s not a tree or shrub on our property that hasn’t been damaged. Power was off most of the night. Tried to keep from freezing to death with candles and a kerosene heater, which tipped over and nearly burned the house down. I managed to put the flames out, but suffered 2nd degree burns on my hands and lost all my eyelashes and eyebrows. Car slid on the ice on way to emergency and was totaled.

JAN 19: Goddamn mother #%*&5@ ‘ white shit keeps falling. Have to put on all the clothes we own just to get to the #%*&5@  mailbox. If I ever catch the son-of-a-bitch that drives the snowplow I’ll chew open his chest and rip out his heart. I think he hides around the corner and waits for our driveway to be clear again. Power still off. Toilet froze and part of the roof has caved in.

author unknown or in hiding 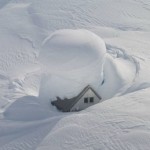