In the mid 1700’s 604 colonist families from Scheswig Germany,emigrated from Denmark to 34 specific German colonies in Russia. Between the years of 1764 – 1766 German immigrants settled the steppes of the Russian Volga area. 104 colonies were established on both sides of the Volga River Bank and extended down into the Crimea.

After sucessive wars with Sweden, Poland and lithuana, Russia faced the Tatars and the Ottoman empire with which she would battle against well into the late 1800’s.  Catherine the Great, the German-born empress of Russia (1762–96) led her country into full participation in the political and cultural life of Europe, carrying on the work begun by Peter the Great. She extended Russian territory, adding Crimea and much of Poland and in the 1768-74 war with Turkey she created  a protectorate over all the Orthodox Orthodox subjects of the Ottoman empire.

Beginning with Peter (the Great), the Russians occupied Moldavia five times and finally secured Turkey’s cession of Bessarabia—approximately half of historic Moldavia—in the Treaty of Bucharest (1812). Moldavia and Walachia,would finally unite to form the independent state of Romania

Having such a de-populated inheretence Catherine the Great solicited and recruited German immigrants into her country. At first, the new colonists were well received by the Russian people. Segregation of the German communitiess within  closed villages inside the Volga region worked for several generations. However, in later years these same factors resulted in envy and resentment by many Russians.

1. The religion of these protestant Germans later to be known as Mennonites became an issue with their Greek Orthodox neighbors.The antagonism directed against the ‘Brethren’ in many Volga German colonies grew and ” “Because of this attitude of intolerance… hundreds of individuals decided to emigrate to America.”
2. The insular and isolation of these communities led to further resentment. The food, the language and the religion were German not Russian. Worse yet, their farms were more prosperous and better managed.
3. On June 4, 1871, a Ukase was promulgated by the Council of Ministers. This decree repealed all privileges originally granted to the colonists in Catherine’s 1763 Manifesto “for eternal time”. Dealing with the legal objections Tsar Alexander II remarked that “a hundred years is an eternity!” The trend toward Russification of the colonists, evidenced by the Ukase and other subsequent legislation, stirred thoughts among many about emigration from Russia.
4. The exemption from military service that had been guaranteed to the colonists in Catherine’s Manifesto was withdrawn by decree of Alexander. For many this was the last straw.

The colonists had already lost other privileges granted by Catherine and the Czar’s government was pushing to make the colonists more “Russian” including language reforms. After scouting reports of plentiful farm land in North America caused many to think about emigration. Rev. Stärkel spoke often about America and emphasized that if he were a farmer he would much prefer going to America to farm rather than staying in Russia to be a soldier.

This grandson of Reverent Wilhelm Stärkel from Norka, one of the first German Colonies in Russia scoped out land opportunities in Wisconsin and Michigan. He returned he returned to his home in Norka and Stärkel’s experience and between his knowledge of the farming conditions in the United States and the Homestead Act of 1862, he became instrumental in encouraging colonists on the Volga to consider starting a new life in America.

The following map shows the major concentration of German settlers in America. Catherine The Greats grand experiment lasted only one hundred years.

The German settlers along the Volga River elected five men to act as scouts to investigate land in Nebraska and Kansas. These five men left Obermunjou, Russia in 1874. They soon returned to Russia with a favorable report. Colonists would then leave the following year, 1875 and ultimately settling in Ellis County, Kansas.
Another picture of a typical German farm in Kansas. 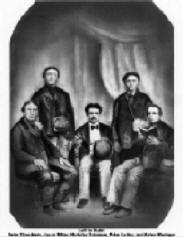 Beginning in the 1760s, German farm families migrated by the thousands to the Russian Empire in search of land and freedom. The same search later sent their descendants, now Germans from Russia, to settle the Dakotas. Those who remained fell prey to the worst horrors of the 20th Century: Two world wars, Communist repression and exile.

Today, Germans from Russia in the former Soviet Union are wandering again, this time emigrating to Germany. Under Stalin, many Germans and Tatars were exiled to Kazakhstan, never to return. The Tatars did come back and settled in the Crimea where today they suffer terribly under the Russian takeover of land that a drunken Kruschchev. In 1954, Soviet leader Nikita Khrushchev gave Ukraine a gift: Crimea. At the time, it seemed like a routine move, but six decades later, that gift is having consequences for both countries. The irony being that the Tatars are now looking for refuge with the Ukraine that they has sacked a few centuries before.

Ethnic German settlers in Ukraine still live in converted shipping crates after waiting two years for a home. Germany is duty bound to accept all ethnic Germans back but sponsors squandered money and the Ukrainian government failed to keep agreements. Immigrants wound up unemployed, living in converted shipping crates in the midst of muddy fields.
Native Russians and Ukrainians regard the ethnic Germans with mixed feelings. Directors of the collective farms appreciate the German tradition of hard work. Most remember World War II. As with the Kazak Germans they are ‘other Germans.”
Some are Mennonites; some are Hutterites. Some belong to the Roman Catholic Church; others are Lutheran. These are the German-Russians. They all lived in Russia, but all are Germans by birth or heritage. Thousands left Russia for the United States, and about 32,000 have migrated to North Dakota. My own family fled the Ukraine and made their home in Czechoslovakia. This refuge would prove to be short lived as WW11 created an occupation of Czechoslovakia by the Nazis and the consequences of defeat led to the expulsion of near three million Sudetenlanders.

To recap:
What were these Germans doing in Russia? In the 1760s Catherine II, who was a German by birth, knew that Germans were excellent farmers and that Russia needed a more stable and plentiful food supply. She promised that immigrants would receive free land, could exercise religious freedom and would be exempt from service in the Russian army.

There was a second reason as well – to create a human buffer zone against the persistent threat of Asian marauders. (We did much the same in New York, Pennsylvania and Ohio, settling and arming Germans to be a buffer against the Indians and the British.) If anything we far less kind, indenturing them to be agricultural slaves. The British didn’t miss the opportunity either hiring 30,000 Hessians as mercenary troops during the revolutionary war.

Catharine offered transportation money the Germans (like in America at that time came from areas heavily damaged by years of war torn Hessia, the Rhineland, and the Palatinate.  Between 1804 and 1824 more Germans, mostly from the Danzig region of West Prussia, accepted the same privileges from Czar Alexander I and began farming colonies along the Black Sea.The land, was of course that which was striped from Turkey.

When he Alexander II became Tsar in 1874. He ended German exemption from service in the Russian army and began a program of Russification — Germans were no longer a special people; they were to become Russians. By 1871 the only privilege left was their opportunity to leave. The first wave of emigration out of Russia corresponded with the grace period before conscription into the Russian army began. Between 1873 and 1914 approximately 115,000 German Russians immigrated to the United States and even more arrived in western Canada.

The  Homestead Act provided lured most to America, especially the Great Plains states, but many also moved to the Argentine Pampas and even Australia.

It was estimated that between the 1880’s and 1910 about 60,000 Germans from Russia (the immigrants and their American-born children) came to live in North Dakota alone. The following picture is a typical farm in western Nebraska, early 1910s. The land was similar to the steppes and hoeing beets could at least be done with freedom from conscription.

These German Russian immigrants were unique group and when they settled in the Great Plains they continued to cluster together based on their Evangelical, Catholic, or Hutterite, Mennonite faith, and for the first few generations there was little intermarriage between groups. The tradition of large families also continued – eight children or more was not uncommon. At least they only wore their wives out one at a time as compared to the Mormons of the same period.