Perhaps sheep would fill the pasture reducing niche. YUP! I went for it and once again my penchant for having the rare and valuable would kiss me in the ass. I had purchased two beautiful BLACK sheep and housed them in an unused chicken barn, but like the cattle they too managed to escape.

I heard rather than saw them from my bedroom window and they were dinning in my choicest nursery stock area. Words do not begin to express my anguish at this. Totally naked, I rushed outside and tried to evict the beasts. When this did not impress I re-armed and tried again. Wearing only my Salmon net and boots (mind you it was a dead moon) I netted one of the guys, threw him on my shoulders and tossed him back in the chicken barn.

I then chased after the last terrified guy who knew what was gonna happen. Like his partner we raced back and forth wrecking havoc to whatever plants may have survived. Please remember, I am only dealing with starlight at the moment. The barbed wire fence that met me with three horizontal reminders was unexpected as was the pain when I finally pulled myself free.

The last sheep was caught and went into the pen. The  butcher was called and I have to admit that I never told the kids when we were having sheep, having learned my lesson from Big Red.

My next misadventure might have been pigs, but that is another story. A  friends experience in Forks, WA forever warned me off on that possible course. Chickens YES, Bees, Yes, cattle and sheep no. 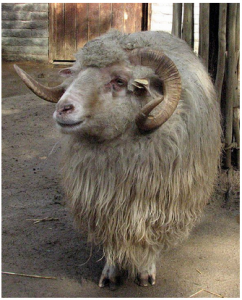 Painfully, I would revisit sheep in the future. Four horned Navaho-Churro Sheep that I had to care and wrestle with. Foot dips, hoof clippings and fleece shearing had to be done. Oh how I hated Verle for inviting me to these rib bruising jobs. I believe I even hemorrhaged in my dream life over those sheep. Luckily I was a bit heavier than the Ram, but not by much and they knew how to use those horns.

The U.S. government nearly exterminated them in the 1860′s and again in the 1930′s, when flocks were massacred by the USDA to about 800 head and Verle contributed his prize Ram to the Navajo nation to revitalize their bloodlines.

Last night I lay in bed looking up at the stars in the sky and I thought to myself,”  Where the heck is the ceiling?!”

I mentioned in the former post about the medical consequences of my groin mating with a stump. That was correct and being the reclusive and un-mated  male I simply opted to suffer the pain. After four months of this I finally decided to see the doctor. This would of course be the guy in charge of the nether regions. He was a good bloke and promptly analyzed and fixed me up with a prescription for groin inflammation. It worked within a few days. I went back to thank them believing the medication was Navom??? or something like that.

I blurted out to the nurse that the Napalm they had prescribed really did the job on my groin. She smiled and said, “Yes that would do it.”

I’m not a complete idiot, some parts are missing. Like my glasses when I chased those sheep!

My Cattle farming episode:
Skip to Sheep farming:
Beware of Pigs.
Bees: and a few other animal misadventures