They’re back: 17-year cicadas to swarm from Georgia to New York. YUM: 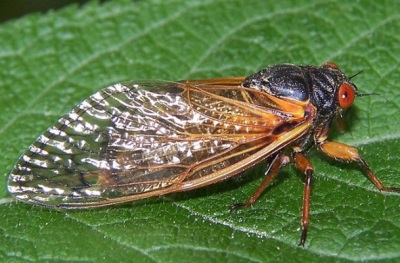 The Most Scrumptious Cicadas ever.The bug hunt begins when the young cicadas, known as nymphs, burrow up from underground. The best time to collect cicadas is during the evening hours when the nymphs are climbing tree trunks. After emerging they will nest on the sides of trees, in shrubbery or even on the sides of the house.

These young cicada nymphs are most delicious according to sellers of such insect snacks such as SmallStock Food Strategies, a supplier of insect-based foods. Immediately after emergence, and before the cicadas’ shells haven’t hardened. The pale greenish-white insects are as soft as crab meat and have a taste similar to asparagus.
Young cicada nymphs are the most delicious, according to the owner. More on insect-food can be found at this link.
In Europe, Dutch scientists doing groundbreaking research into insects replacing animal meat as a healthier, more environmentally friendly source of protein.

“There will come a day when a Big Mac costs 120 euros ($163) and a Bug Mac 12 euros, when more people will eat insects than other meat,” head researcher Arnold van Huis told a disbelieving audience at Wageningen University in the central Netherlands

The best way to start is to try in once. At the University lunch counter there is a sprint for the snack table for a spread of Thai marinated grasshopper spring rolls, buffalo worm chocolate gnache and insect pastries, just like a quiche but made up of meal worms instead of bacon or ham. Heck I was doing that decades ago Follow down to my written and rejected suggestion to McDonalds. (McCrickits) As ahead of the time I was over 500 types of insects are eaten in Mexico, Africa, China and Asia where they are viewed as a delicacy. 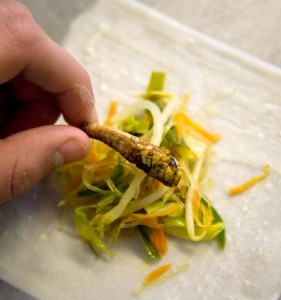 At the University of Maryland ‘Cicadamaniacs’ has been created, featuring copies for everything from cic-delicious pizza to cicada stir fry Banana bread made with you know what – Cicada. Or crunchy Spring Rolls. 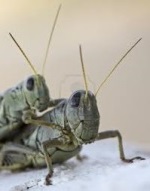 Once in a while I would try things that my daughters would draw a line at some of my culinary experiments. You see,. I used to be a beekeeper and often did munch on melt-in-the- mouth fried bee larva. However, the memory that inspired this recipe was much rawer and certainly inspired by Nursery related memory. Two Pt. Townsend friends were helping me divide my Astilbe. Strawberry root weevils were found within. John and I were squashing the little devils when we noticed that April (Jain Buddhist that she is) was making a neat pile of them by her side. When asked, what she was doing with them, John reached over and popped some of them into his mouth.
I asked, ‘how where they’? Quite good actually. I reached over and did the same. April was never quite the same after that. Then again I have a way with women. Other cultures around the world accept insects as a healthy ingredient in their diets, providing an excellent source of protein. Insects are an inexpensive substitute for meat in many developing countries. In Guatemala and Mexico grasshoppers, locusts and other edible insects are sold by the pound. Fried or barbecued they are great. Some are even sold in cans, Chocolate covered, chilied ants etc. Moth larvae and bee larva once deep fried are crunchy and make a great snack for those Saturday football games. Bug popcorn might include crickets or locusts. A take me to the movies or ballgame idea! I actually gave this idea to McDonald’s, suggesting that they could really hop on the environmental wagon if they would only start serving McCrickets. Soy flavored, garlic fried or with hot sauce you name it. Crickets and bee larva taste great! The same goes for stopping the beef ranching conversion of Central America. Try raising Iguana instead! They taste like chicken. Iguana burgers would be great. My final plug being that insects are cheap, tasty and provide good natural protein source and requires less land and feed than raising chickens, cows or pigs. Many insects are far cleaner than other creatures. For example, grasshoppers and crickets eat fresh, clean green plants whereas crabs, lobsters and catfish eat any kind of foul, decomposing material than they can find. Being on the low end of the food chain, they also have far less chemical or anti-biotic pollutants in their bodies.