From Cardinal Fang a contributor.
And I would make the comment, they do not have to be round and can be used to create some funny snacks that the kids will love to make.

“I make onigiri (Japanese rice balls) for eating when I’m on night shift. 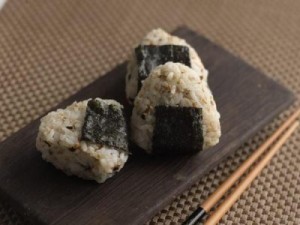 First cook your rice. You can use any short grain rice. Sushi rice is traditional, but risotto rice (e.g. arborio rice) works just as well. Don’t use normal long grain rice – it doesn’t work. You need to rinse it first in water until it runs clear. You cook it in two cups water for every cup of rice you use. Put in a pan, bring it to a boil then simmer covered for 15-20 minutes. When all the water is absorbed and the rice is done, remove it from the heat and leave it to cool for a little while.

The simplest onigiri are plain rice but you can put lots of different fillings in them.

The traditional method of shaping onigiri is to use wet hands dusted with a little salt to stop the rice sticking, but there is an easier way.

Put a couple of tablespoons of the cooked rice in the center of some clingfilm (aka plastic wrap). If you’re going to put a filling in, put a small amount of it on top of the rice then add another spoonful of rice to cover it. I like to dampen the inside of the clingfilm and sprinkle it with a tiny amount of salt, to get that same good salty taste you get from shaping it the proper way.

Gather the cling film up and twist the top tight with one hand. Use your other hand to shape it into a ball. Unwrap the rice ball and you’re done! Wrap it in a fresh bit of clingfilm if you’re eating it later.

If you want to take your onigiri a step further, wrap your onigiri in a sheet of nori (roasted seaweed, like they use in sushi), or roll in in a flavoring e.g. sesame seeds, or furikake (japanese seasoning made of salt, seaweed and spices).

Traditional fillings include umeboshi (Japanese pickled plums) or fish, but you can put almost anything in it. Spicy, salty or sour thing work well.

I quite like putting hard boiled egg and some grated cheese into mine when I make them, but you can put almost anything in them (I know it’s not always traditional). Spicy, sour or salty stuff works especially well. I like hard boiled egg and cheese but try these:

Fab either in a bento box or on their own as a snack.”

“Life consists not in holding good cards, but in playing those you hold well.”