Since I added this paragraph – “My answer is to wipe out 75 percent of your meat intake and start learning LENTIL. Soy milk, soy protein. Vegetable smoothies, soybeans and brown rice might go far in preserving a planet population that will be three times the size of mine when I was born in 1950. to my recipe page. I will be adding some as I process them. 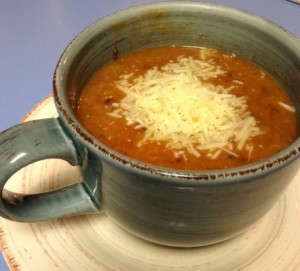 Not ONE computer recipe for it! (When I type them out, I will put links on this page.)

I usually veer to the Indian spices and recipes, but have also used the common Ham hock or shredded chicken to a lentil-vegetable base to make more of a chili out of it. I did find copious notes from when I had been making this dish. Especially good for cold winter nights. Strangely, I stopped making it. Lentil dishes are also very good for slow cooking in crock pots. (BUT NOT with black beans!) Also a good ‘survival’ food to stock up on as if sealed, the lentils will last for years! (mixed lentils are also good)

I would love to hear from the forum their own variations. Red Lentil Soup – typical Indian mix with cumin , mustard seeds, chilli powdered turmeric powder. Maybe some Coriander. For other recipes I go with smoked paprika.

The Ham hock is typical fare, chicken broth, veggies etc.
I do like mixing Black Beans with Lentil Soup CANNED … I once had a bad experience under cooking beans and paid for that carelessness mightily. Carrots and smoked paprika or chipotle seasonings give it a warm orangy color. Most of my lentils are red. Usually some meat is involved, ie a few strips of bacon, fat removed.

The Vegetarian alternative would be to use vegetable bullion. Not as satisfying by a long shot.
From my Indian cookbook I also made a Dal/lentil soup using tomatoes and onions of course.

My own addition to this thread is a bit sadder. Lentils are also a good ‘survival’ food and if properly stored will last years.

My fridge died a few days ago and I did not notice its demise until I pulled out something with mold on it. Everything got dumped. By the time I had finished I had nothing to eat. Grabbed some lentils, cooked them, added some black beans (canned). What else do I have? Some garlic greens from the garden and a can of Campbell s tomato rice soup. Dat was it. Not a gourmet treat but it wasn’t bad at all. Yogurt would have been nice.

Forgot, I did add spices Turmeric and Garam masala.

I would grow them, but they are so cheap it doesn’t make sense and I would have to mail order the seeds.