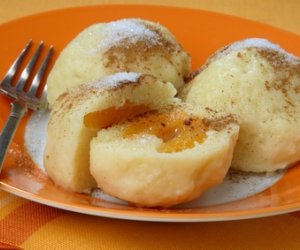 Slice the breads into cubes and soak in lukewarm milk. Bread should be moist but not sloppy wet.
Dice the bacon and fry down, add butter and add the chopped onion, add parsley. Put in a bowl and let cool. Meanwhile
Add eggs and seasonings to the bread and milk mixture. Stir well to mix.
Combine with the fried ingredients, shape into small dumplings. Cook in salted water for 20 minutes. Not boiling — low to moderate heat!

another way was to grate some peeled red potatoes into salted water — drain and express the moisture through a towel. Follow the same instructions for bread and onion. Mix the above with the potato mixture. Roll with flowered hands into dumplings. Cook as above.

This was often added to beef dishes with sauerkraut.

Cut crust off bread and cube it. Put into bacon fat and butter — let it absorb the fat entirely. (my mother I am sure used some potatoes grated in salt water too!

Put greased bread in a bowl and let cool.

Mix flour, milk and eggs. Add seasonings and pour this mixture over the bread cubes. Gently mix and let stand some 15 minutes — allowing the liquid to be absorbed. Gently stir to blend the dough thoroughly. Flour hands and knead away, shape into dumplings or?? (My mothers were the size of baseballs and had the same effect on the stomach.) Cook, covered  in salted water for twenty minutes. Not boiling — low to moderate heat!<

8 red potatoes, peeled and quartered into a pan of salted water.  Boil
1 egg
flour
1 tsp. salt and some black pepper

Your improvements on these recipes would be appreciated.

Lisa responds: I make a variation of the potato  knödel which are not as  heavy.  I boil potatoes, grate them, add 2 eggs, salt, flour and Farina.  I don’t measure, but I add flour until the mixture doesn’t stick to my hands when I knead it.  If you like the dumplings softer, leave the dough stickier. I think the potato knödel sounds the most like the Klase I remember.

Remove while hot the potatoes, mash well. Cool in the fridge. When cool, bring out and put in a bread bowl, add enough  flour as there is potatoes. Sprinkle with salt and some black pepper.

Mix and combine. Add the egg. Mix in.

Flour hands and form into small baseballs. Bring your kettle to a boil. Coat finished baseballs with flour and add the dumplings to the water one at a time. Boil in salted water for 20 plus minutes. Depends on the size of the baseballs. Reduce the heat (after all are in) to low to medium heat.

These are German cannonballs and will have the same effect on your dinner guest.

“The way to a man’s heart is through his stomach” — and Lisa once these suckers hit the stomach, it could immobilize for at least a day and a night.