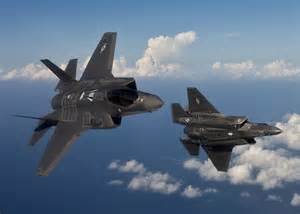 The US Air Force and US Navy F-35 JSF Fighter Aircraft Pictures … will now replace existing planes like the F-16 and the Warthog. It was described to be a fifth-generation, single-seat, single-engine, stealth-capable military strike fighter, a multi role aircraft that can perform close air support, tactical bombing, and air superiority fighter missions.

The reality is much differing. According to a Rand war scenario developed for the Pentagon, the most expensive military weapon in the history of mankind is a complete and utter failure. The futuristic warplane is supposed to replace all other jet fighters in the US arsenal at a cost of $1 trillion and climbing. As one critic published a few weeks ago, that’s enough money to buy a $100,000 home for every homeless family in America for the next six generations.

Amazingly we had the chutzpa idea to export this lame duck to our allies.

One Australian military analyst who recently entered the field of politics after arguing against his country’s purchase of the F-35s. He warned fellow Australians that in combat, America’s new F-35s will get, “clubbed like baby seals.”

Sigh, If only we had 2 Trillion dollars to burn.