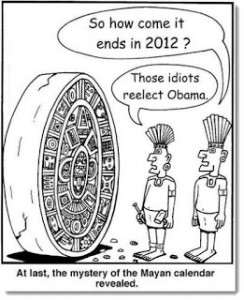 Wasn’t that just a few years ago?

Not to happen, but Mayan madness sure heated up in 2012. I of course fixated on what to serve my friends. What should you eat or serve on your last night on Earth? I am so surprised that restaurants didn’t offer some ideas on how to fill your belly or empty your bowel’s as the Mayan calendar drew to a close.

First off, it would be what to wear? I would suggest Mayan attire for at least a discount on the Happy Hour. Might be a bit December breezy for the guys with snow in the forecast and the gals would be a bit revealing, but what the hell, it’s the end of the world. Let’s Party Like there’s No-To-Maya.

#1 Environmental cooking alternatives would be my first choice. A good chicken entrée might be organic range free Iguana . Finger food appetizers would of course be insects. I have always advocated the increased culinary usage of crickets and locusts. (Even sent it to McDonalds!) Garlic, Sesame roasted, ginger or hot sauce McCrickets would be a sure gut pleaser.

Fried bee larvae also worked for me. Rice flour and Indian Pakoras would hide the delectable larvae inside and it could be re-named into something tasty. Apis mellifera Pakoras might not work, but honey bee delight does. The chocolate covered ants would bee for desert of course. Mexican molee would of course be made with real moles.

#2 Re-naming of the common entree’s also works. The Apocalypse menu would include Volcano S’Mores, Tsunami Fish+Chips and Chicken Kiev with Chernobyl mushroom sauce.

#3 The wildlife smorgasbord approach. Eat all you can. Nutria, possum, raccoon and rat. Foraging for greens– show videos by Euell Gibbons until you tip! Or if your on a cruise ship I would book with Noah and Rachael Rae.

Entertainment __ ABBA, Velvet Underground or bring up some Mayan shamans to slum the evening. I opted for ‘Amazing Grace’ by Hayley Westenra a totally awesome singer.

Then there is the question of who to invite? Ex’s sound good to me. BTW – The insect ideas have been eaten by me in the past, some even went down sushi style.

#4 Cultural Sensitivity: Masai Blood Milk shake, French : Frog legs in synchronized layers in aspic or blue Jell-O. CA: or Northwest: Something Seismic ?? like wasabi salads to rock your dinner. Meteor needs to be used! I like the warning to put the fire out before drinking that offering.