This fishy construction was begun by a FSM  posting some TWO years ago with no responses. Swim down towards the food.

Cardinal Fang
“According to Uncyclopedia, there is a controversial theory called Automated Creationism. This theory proposes that the “Flying Spaghetti Monster” designed a process by which all of creation would come into existence through natural progression, initially triggered by Him in one significant event, called the Big Boil*. Such natural progression would also serve to mislead scientists, something that causes the Flying Spaghetti Monster much delight.”

“(*The Big Boil Event took longer than He expected until He created salt and added it to the mix. This initiated the Big Boil and also explains why the sea is salty.)” 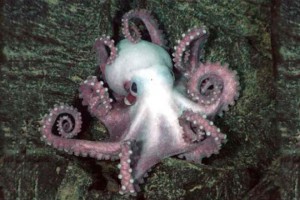 In the midst of the seas there was a great void. It was a time of deep darkness, before the first crustacean or fish. Into this amphibious void came the Giant Octopi known as FSM. With his eight tentacles, enormous testicles and all seeing eyes he created the Cephalopods known as Octopi and Squid.

The oceans were colorless at that time, so he squirted his great inkiness into this domain. The shallow seas remained churned by the gods of the air and the coloration was blue.  The remainder of his inkiness settled downward and the ocean became ever darker and the creatures of the land could not penetrate those great depths.

The FSM gave the care of the sea that surrounded him to his minions and they can be found guarding the oceans under the boulders he had deposited for them to live under. FSM filled the seas with living things: diatoms and krill to feed new swimming creatures of every sort. He even created squid and penguins that would dine upon the multitude. He created sharks, turtles and whales. Some of these even ventured upon the land. The whales would return. His angels the flying squid could even fly.

To the coastal regions he created Kelp and in this sub domain of great forests would be the sea anemone, crab, starfish and non-gilled animals like the seal. On the fifth day he was satisfied, and sank to the deep abyss of his Pacific ocean. Centered near Hawaii, his tentacles reached from East to West and North to South, breathing life into the Pacific Rim with every quiver of his body.

Soon creatures (he had not breathed his soul into) would intrude. From land, they would sail upon his domain and harvest the Whale and Octopus. Even his archangel the Giant Squid or Kraken could not end this plague on the oceans. This would make him furious and he would stretch his limbs and pull on these tectonic hinges causing, fire, eruptions, quakes and tsunamis to cull out those he had not created. In his greatest anger he flooded the pustules of land and thought it was it was good.
It did not work and even today he battles against the angel who had ascended to rule the lands he could not convert.

This beautiful kelp forest picture came from this site.

EDIT: I usually do not slum for comments but in this instance I will. I had fun with this and a ‘Lucifer’ is always needed in a creation story. This is a post that needs a follow up –  including  ” I would love to hear more about this foe , this angel who gives him trouble.”

Wish I had a clue on this one, but I don’t. Same for prophets or old testament revelations! Perhaps we landlubbers are all in ‘Hell” already – that is why I put the ocean noises in and the ending with Carl Sagan. As I see it, humankind doesn’t deserve the life space any more.  Any story line submitted would be credited to the author- web links included. 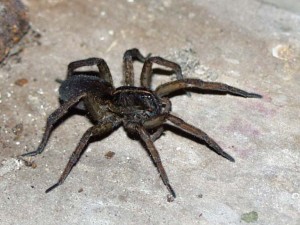 A friend of mine is a Parrot rescue person and her focus is on these feathered relatives of ours. I tend to be more inclusive and every time I see the dead tropical fish in Wall mart being scooped out with a net, it just makes me cringe. Nature and other life forms have become disposable entertainment for our empty consumer lives. Fish are complex, intelligent creatures as well, and don’t belong in aquarium’s no more than a parrot belongs in a cage. Have we become so impoverished that we need to imprison other life forms? Perhaps, because we just can’t stand our own company? The Cephalopd religion does have a gospel.

Do send me some feedback, positive or negative – and do check out my Octopus sports story. Should I ascend, I fully expect ‘eternity’ to include some Photoshop editing on my body. Fascinating link!

Back to prophets. Sadly St. Paul the Cephalopd prophet has passed on and his tentacles will no longer lead us.