The cellar in our Pike Creek country home in the early days of my childhood was a very special place. It had own special smells. Possibly a mixture of dampness from the stone and dirt walls that sometimes leaked, especially after a long period of rainy weather. Earthy smells would emanate from the various vegetable bins of: potatoes, rutabagas, carrots and beets, and from the gradual winter rotting of strung-up cabbages as that season thawed into spring.
The cabbages were suspended upside down from the wooden ceiling beams. Sometimes, however, a very pleasant fragrance would intrude, coming from the apple barrels that held our winter’s supply of home grown fruit — or at rarer times from a carefully guarded box of wonderfully exotic oranges. (a rare treat). Then there was the canned fruit section. Shelf after shelf of golden apricots and peaches, red sweetened tomatoes spiced with cinnamon sticks, raspberries both wild and of the garden variety, and most heavenly of all — wild meadow strawberries.

I recall one summer my brothers cleared some land east of the road. It was a bonanza year for wild strawberries. Everyone picked those gorgeous unbelievably large and fragrant jewels. Mother proudly put away fifty quarts that summer.

Then too, there were two large wine barrels seemingly in perpetual ferment Father was famous among his German cronies for his raisin wine. None of that “wicked brew” was ever served to our straight-laced Swedish neighbors who considered alcohol in any form, or card-playing, whether it was “66” or “Smear”, and dancing as a sure-fire ticket to the nether regions.

One barrel was held in readiness for any occasion, and the second was always “working” for the next year. Father made use of a “bung” when he’d extract a bit and upon occasion even the children were given a small sample. Add that delectable fermenting fragrance to the cellar smells and you’ll get a fair idea of that very special aroma.

One other contributory was the sauerkraut crock. Every year that stone crock, (and there must have been many, since sauerkraut was our mainstay salad all winter) would be filled with hand shredded cabbage, salted, covered with bean or grape leaves, topped with an upside down dinner plate and weighted with a clean stone. Then left to ripen … age and smell.

The hens on the farm did most of their productive work during the summer months and only part time in the winter. So mother would save dozens of eggs and place them in a crock and make a “Water-glass” solution using sodium silicate purchased from the drug store under the label of “Water Glass.” This solution sealed the pores of the shells and helped preserve the eggs’ freshness indefinitely.

Room in the cellar was found for that crock.

The cellar also found use as a shelter from ominous midsummer storms. I recall numerous times when I would urge the family to retreat — but fast! to the safety of that impregnable cellar. After frantically burning a few blessed palm leaves I had kept since Palm Sunday for just such a purpose, I decided we shouldn’t leave it all to the Lord’s mercy. We had to help ourselves too! Usually I’d be able to muster a few of the family to join me in the cellar haven, but I don’t recall Father or my brothers ever admitting to that danger. Those macho guys? No, the cellar was for the trembling females.

On the more pleasant side, in the hot, humid summer, the cellar was the one place on the farm where you could find relief, albeit temporarily. How heavenly to set your bare feet on the cool, damp, wet stone. And on those hot summer Sundays we would make ice cream. After mass we would pick up a huge chunk of ice at the Ice House near the Mississippi river for fifteen cents. With sawdust still clinging to its sides, the ice would be placed in a gunny sack and clobbered until we had a sack of chipped ice.
That combination of melting ice and sawdust had its own peculiar smell and even today it can suddenly bring back vivid memories of Mississippi ice cooling one’s tongue and ice cream samplings that took place long before the ice cream was ready. Ah, what fragrances!

And today sixty, seventy years later, I can at will, transport myself back to that old farmhouse, lift up the trap door to the cellar, lock it in place and descend into my childhood memories. thaw out those frozen memories.

© Lee Mathilda Thoma, given to me in 1993 for my Garden Magazine called ‘Bindweed.’ 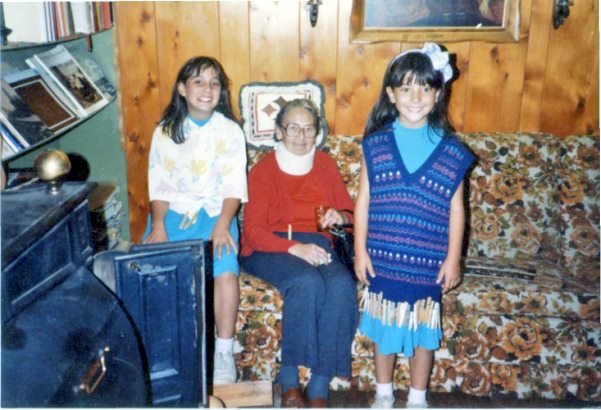 Partner and wife to Wayne Ostlund of P.A., who always had something cooking. This dear friend of my mother, would also be like a mom to two of my children and there would always be an apron ready, especially for my youngest, Naomi. The picture is of them with my Mom while we warmed ourselves by the Franklin stove. Lee was also the adoptive mom to my partner at that time.

I should add that Wayne was an expert wine maker and those two daughters would get to sample their first fruit wines from his coveted stash. I needed to add a venison pot roast/crockery recipe for Lee. Read the edit at the bottom. The recipes for his wines would be hard to duplicate.

The song is ‘The Apple and the Lilac Tree’ by Kate Wolf. On Sept. 21 2014, I revisited Lee and Wayne s home site and found their final resting places in a grove of Engelmann Spruce. It was a most fitting shrine and I am trying to find the words to describe the awesome memorial for Wayne.

Both of these two were peace activists in a time it was not popular, but that is another story. At that memorial I met the artist Jane Withrow who gave me the picture for one of Lee’s Poems. Sadly I cannot find it, but both Wayne and Lee loved poetry and this ‘Hummingbird’ was one of hers.