The following are the cherished recipes for the Old Country of Molvenia;”written in 1988

Once in a while I would try things that my daughters would draw a line at, Some of my culinary experiments were … you see… bug related.  I used to be a beekeeper and often did munch on melt-in-the – mouth fried bee larva. However, the memory that inspired this recipe was much rawer and certainly inspired by a Nursery related memory.

Two Pt. Townsend friends were helping me divide my Astilbe. Strawberry root weevils were found within. John and I were squashing the little devils when we noticed that April (Jain Buddhist) was making a neat pile of them by her side. When asked, what she was doing with them?, John reached over and popped some of them into his mouth.

I asked, ‘how where they’? Quite good actually. I reached over and did the same. April was never quite the same after that. Then again I have a way with women. Other cultures around the world accept insects as a healthy ingredient in their diets, providing an excellent source of protein. Insects are an inexpensive substitute for meat in many developing countries. In Guatemala and Mexico grasshoppers, locusts and other edible insects are sold by the pound. Fried or barbecued they are great. Some are even sold in cans, Chocolate covered, chilied ants etc. Moth larvae and bee larva once deep fried are crunchy and make a great snack for those Saturday football games. Bug popcorn might include crickets or locusts. A take me to the movies or ballgame idea! I actually gave this idea to McDonalds, suggesting that they could really hop on the environmental wagon if they would only start serving McCrickets. Soy flavored, garlic fried or with hot sauce you name it. Crickets and bee larva taste great! The same goes for stopping the beef ranching conversion of Central America. Try raising Iguana instead! They taste like chicken. Iguana burgers would be great. My final plug being that insects are cheap, tasty and provide good natural protein source and requires less land and feed than raising chickens, cows or pigs. Many insects are far cleaner than other creatures. For example, grasshoppers and crickets eat fresh, clean green plants whereas crabs, lobsters and catfish eat any kind of foul, decomposing material than they can find. Being on the low end of the food chain, they also have far less chemical or anti-biotic pollutants in their bodies. 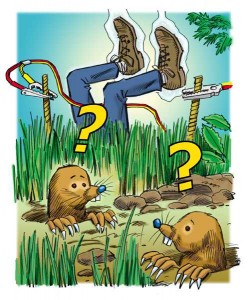 Think about it! My grandmother would be so proud of me!

MOLE RECIPES My own cooking skills subterranean as they are, found moles to be a culinary challenge indeed!

MOLESHAKES, easy enough after one learned to remove the claws. Trust me blade replacements are not cheap. MOLE BURRITO (El Topo yumo) was easiest. Simply bury the mole in revered beans. Nuke it in the the microwave, then place within tortilla, roll and bake. Serves one date at least. Comparable in flavor to mouse, though more garlic and Habenara sauce are needed to liven up the taste! If you really want to impress your partner, try the unexpected. A morning breakfast in bed. THREE MOLES IN A BLANKET, a guarantee for a festive bedroom conversation.

The “Put down that newspaper and speak to me” presumes that the other partner could hold ones breakfast long enough to read. Perhaps I simply did not get them crisp and brown enough. My pride and joy remains one stolen from Dumpster, who taught me all the best pickings. SAURMOLE:

In hard economic times one needs to be creative. Fresh meat can sometimes be scarce. Poorer quality kills can be tenderized by soaking in a 3 day vinegrette. A Mole braten, soured by son. Last Christmas the Saurmole was served Julian– with baby carrots and Dumpster recovered onion rings. For the season I splurged (spent money) and added the piquant catalyst of parsonips — Heaven sent to meat that would wake the dead.
Being parsimonious myself I would set the table with the accouterments of the beast itself. The ambiance was set, the candles were extinguished. Damn, how was I to know she was a Vegan?

With moles scattered from pole to pole, she wanted greens. The final insult was the request for clean napkins. I replied, somewhat testily “use the table cloth — I just washed it!* Some people just don’t got mannas! Wine was Neuharth Red. Near as good as a bougeley. Never let it be said that I was uncouth! “THE MOLE WORM” Moles have died from time to time, and worms have eaten them, but not for love.” Shakespeare, ‘AS YOU LIKE IT!’ Back at the HERBFARM “Ever since he helped elevate us to four-star status the Health Inspector stopped finding moles in the Master Garden and the children quit asking ‘what went into the Bouillabaisse.’