A conversation on another site involved Seafood and Japanese cooking. Those onigari – Bento (rice balls) were exceptional. I do have a Japanese cooking book and will now try out some of those recipes.

As for ‘Sushi’ — I am yet to be sold. Too much experience fishing, fileting and seeing what crawls out. I would only buy Japanese imported Sushi as the radioactivity should have killed the bacterium’s you are eating, much less the worms.

Whale meat?? They still are buying whale kills from the Makah tribe in WA. which has been given the approval to ‘harvest’ them as it is part of their tribal heritage. Guess where the meat goes. YUP! Japan! Same for the biggest shrimp harvested off Alaska. The American consumer never gets to see them. 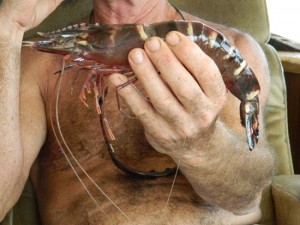 What the Japanese were buying were “COLOSSAL” These are 14 to a lb.
Super Colossal and Extra are 10 down to 5 respectably. I was fortunate to be able to grill some of these ‘ten’s’ on the grill. What blew me away was the ROE! This was ten times better than the shrimp itself or any caviar I have ever eaten. Sadly that was decades ago and I doubt I will ever see anything like those beauties ever again. The actual grade was #6

I must make note that my shrimp experience was being served giant #6 Alaskan shrimp so large they stretched across the plate. Barbecued in a like manner … But it was the roe that was beyond belief!

For a sweet and sour alternative you might consider adding:
1/4 cup tomato sauce or chopped up Italian tomatoes, smoked if you can find them.
2 tablespoons red wine vinegar
add 1/4 cup of honey or brown sugar.