April 1 – Catch up on gardening — sew leaves back onto trees. Do all the cooking for ‘the end of the world dinner.’
April 2 – Take stray dog apart. Cook and make dog stock. Write book on Survival-ism and the harvesting of local food resources.
April 3 – Buy Indian/Pakistani carpets to support their children and the poor.
April 4 – Drain water tank; refill with cider, orange slices and cinnamon sticks.
April 5 – Lay Faberge egg.
April 6 – Freshen air by sliding deodorant shoe inserts into heat pumps.
April 7 – Use Ancestor.com to splice DNA from dinosaurs into my children.
April 8 – A blank – what happened?
April 9 – Finish needle pointing colostomy cozy.
April 10 – Organize spice rack by genius and phylum.
April 11 – Attend workshop on obsessive-compulsive disorder. No notes, but renew from habit.
April 12 – Replace Air Freshener in all my rooms in case I dye and am not found in a timely manner.
April 13 – Address sympathy cards for all friends with dementia so they’ll be ready to be mailed the moment they know their death occurs.
April 14 – Get new eyeglasses; grind lenses from beach glass.
April 15  – Fashion cat o’ nine tails. Flog the gardener. Talk to I.R.S. again.
April 16 – Repaint Sistine Chapel ceiling in chocolate and vanilla.
April 17 Harvest enemies. Place in crock pots. Remove air. Sauerkraut them.
April 18  – Gild lilies – like the govt. does daily.
April 19 – Dinner with Royal Family. Enjoy the Ritz crackers with chutney.
April 20 -Read “Men Are From Mars, Women Are From Venus,” Suggest to authors Ur anus as the next planet to investigate.
April 21 – Visit crematorium. Collect dentures. They make excellent pastry cutters, particularly for decorative pie crusts.
April 22 – Visited gardener, whose bathtub to dust bath bathroom conversion, inspired me to go out and redesign the chicken pen.
April 23 – My bird bread recipe now eliminates Sequim lavender. The omelets are much improved.
April 24 – On Colonoscopy. I loved the Rite-Aid enema prescription so much I went in for a refill.
April 25 – I Feng Shui’d the chicken pen and found unexpected buried cash in the rut-a-begga bed.

Sometimes, men need to suck it up. Whether that’s cleaning out the gutters, diving into a gnarly diaper for the first time, or getting that colon consolatory-scopy because they need to be done.
I can do most of that on the CHEAP! Night scopes help on the latter.

Song was ‘Masochism Tango’ by Tom Lehrer. I attended  a few of his lectures and may admit to having been minutely infected – or activated by by his genius and sense of humor.

All fun aside … I think she got a bum rap when other Wall street crooks got off free.  She served her time and resumed her life. Moreover she remains interesting. Check out this site of her early years. Still has GREAT eyes! 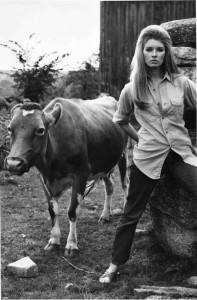